The Sonoma Wings St John Fly In was huge fun this year. It is always of course, I was able to enjoy the flying tasks more this time. 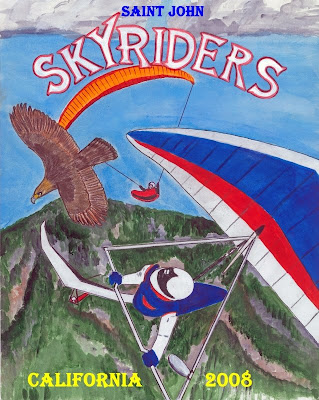 Saturday was one point / mile out & 2 points / mile back with 10 points for making it to Mary's Field. With the forecast for south winds at 5mph, I set myself a huge out and return to Red Bluff. I didn't expect to make it back but was hoping to fly along I5 to Willows and the Hoodoo Hills. I turned at this wierd little airstrip, into the south wind that had been increasing during the day. It was now about 20mph and even with 3 climbs I only made it 3.9 miles back into wind. 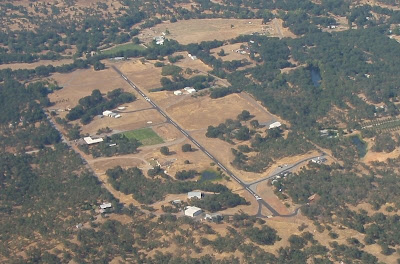 Scott made a better decision and flew south first to Goat I think? 15 miles south. Smart move, in terms of stratagy he should have beaten me but it turned out I flew 1/3 mile more, very close... On Sunday, a really fun task was called. It seemed that one good climb at Launch and and the 11 mile upwind turn, and 5 mile downwind should have been a no-brainer. However there was a lid on the lift at 8k. Hmm different game... Plus there was a timed finish - on the hour. I got to the turn point after a bouyant but nerve racking deep mountain crossing at 6k. I had an LZ on glide but there was strong sink around. Once I made the Gilmore turn point the valley turned on, it was easy to stay up. Above looking back at Mary's LZ (goal). Easy glide but now to arrive there at 4pm on the nose. Scott was flying right next to me, and Bruce was over the field at 6k too. 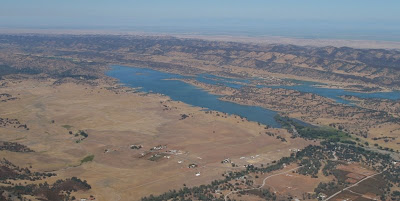 At 3:45 I went half way toward goal and joined Scott. Everywhere seemed to be going up. At 3:50pm I streaked across the sky and joined Bruce, Scott on my tail. I was too high and everywhere was lifting. Insane spiralling ensued. I hope someone got video of that. Bruce below, taking pictures didn't help me get down - but it had to be done. It was hard to hold the camera straight with the G forces. Bruce nailed the landing a mere 15 seconds before the clock. Then a boomer broke off! Stuffing the camera away I was climbing in a wingover. It was an exciting approach, I am glad it was entertaining and that it worked out ! I think I was 1minute15 over. At the award ceremony Mary, was quite pleased to receive a didtal photo frame with pictures of the area from the air. Everything worked out great, and I know that doesn't happen by chance. A huge thank you to the Sonoma Wings club. Leo for pulling it together in style - he also created the artwork pictured at the top. Ernie for the great BBQ and giving rides up the hill, Donna, Linda and Especially Sarah who I've worked hard this year! Thanks Sarah.

Checks Ryan's Blog for a great write up and pictures also.