Lock out on tow

A couple of weeks ago I had an experience I'd rather not repeat. I think there are some lessons that can be learned, so I'll share. In short it was a hang gliding launch that went wrong. I got away with it but just barely, I was exposed to far more risk than I was comfortable with...

The day seemed fairly harmless, wind was SE on the ground at 5-15mph a little gusty - but that's Texas. Above 200ft it was probably S @ 20mph. Air was unusually cold for the wind direction. I had already taken one flight. 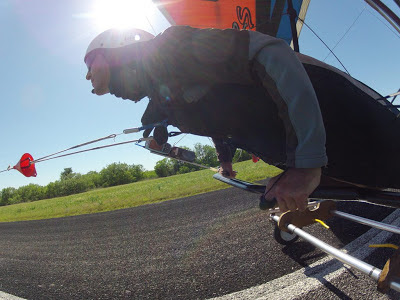 I came out of the cart very smoothly, level and perfect airspeed. Just as I was starting to relax into the tow, I got whacked on the right wing. That made me climb and yaw significantly left. With full right weight-shift I came back into line (though I was still high). Just then the second surge hit, this lift was a lot more turbulent. 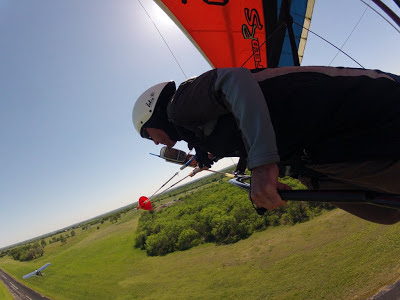 I went to pin of with my right hand, I was already too high, and surging upward, right after taking my hand off the bar the right wing rapidly lifted.
I was happy that Joel beat me too it and gave me the rope. As you can see from the sequence below, I had quite a bit of energy from the sling shot effect, but also with the air being pretty radical. Even off line I continued to be pitched up despite pulling in. All to soon I was without airspeed in a bad sideslip, I think the images are 2 seconds apart.So the sideslip was about 4 seconds (that's a lot - I was begining to think I would side slip to the ground). 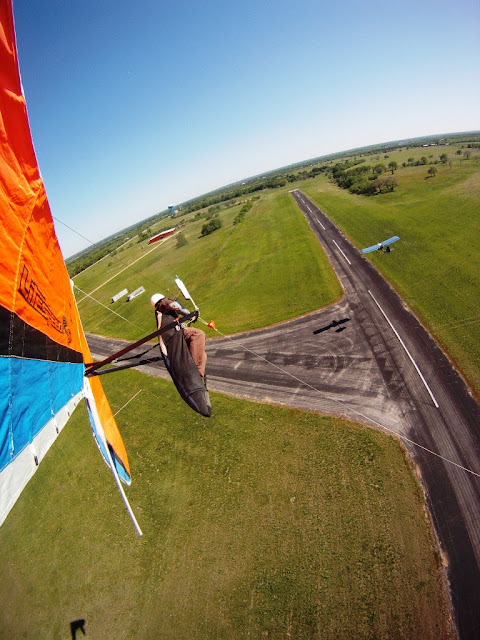 The nose did come around as I dumped the VG, and I was flying low right back into the air that had caused all this, downwind and I was dragging the the 180ft tow line. I was a pretty unhappy chap! 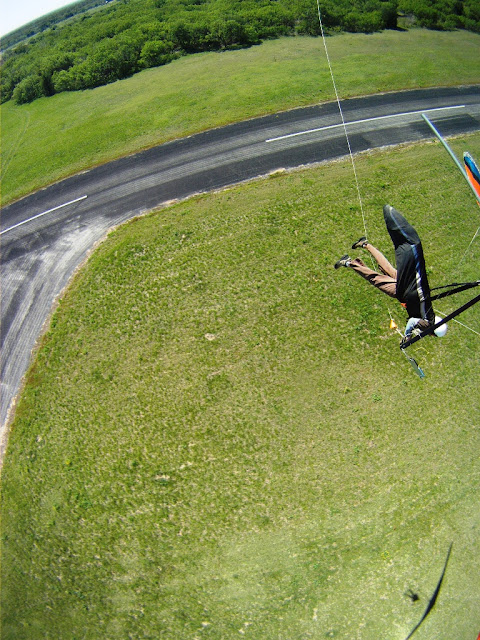 I think some of the nasty air actually helped get my glider back into the wind for a no step (check your underware) landing. I'm not for a moment going to claim full authority over the glider. From roll out  to kissing the ground was less than a minute.

So what can be learned from all this ? We certainly are exposed to a higher level of risk from 20-80ft on tow. Are there things that increased my exposure? After having mulled over this a while I'd say there were three different possibly companding factors.

1. I think I was flying with too much VG (4/5) This compromised my roll control.

2. I had a camera on my sprog, and I've noticed before at high airspeed, the handling does weird stuff (probably on acount of the zipper being open and air pressure changing the camber).

3. In Luling we tow at higher airpseeds, this narrows the envelope that a glider should be in behind the tug. Which in turn will reduce the amount of turbulence that can be handled.

I think each of these factors on there own are innocuous, but combined had a dramatic result. I'd rather not do that again.
22 comments: Links to this post
Labels: hang gliding, luling
Newer Posts Older Posts Home
Subscribe to: Posts (Atom)