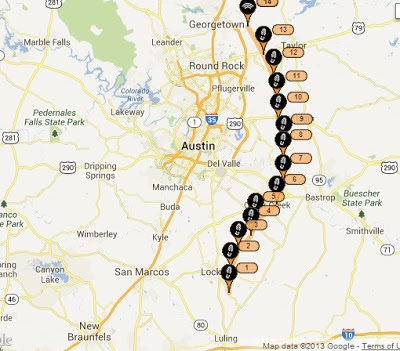 Good flying day yesterday, Danny and Nate rallied Jeff from Fly Texas to tow us up. Goal was Chris's up near Georgetown, with a couple of turn points to clear the Austin Airspace. It's about 64 miles or so. I flew with my spot tracker, I love the convenience of it. Oliver our retrieve could track me easily on his smart phone. This is what it looks like. 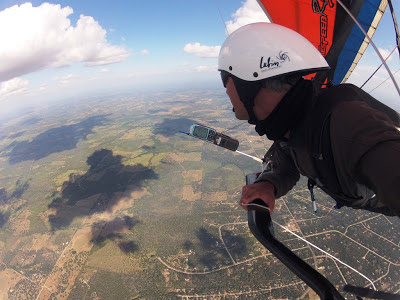 With one thing and another we were slow getting going, I didn't go on course till nearly 5pm. Nate and Danny were a little way ahead. Climbs were quite slow, especially low under 3k. 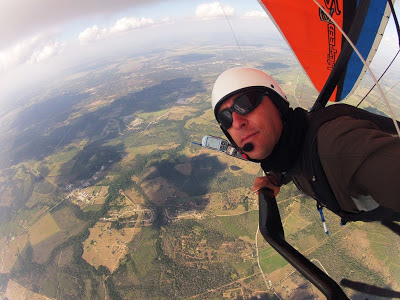 I don't think any of us really got up to cloudbase until just short of Bastrop. I got a climb to near 7k, and the flight got considerably easier from there on. Unfortunately Danny got drilled just before there, but worked his way along through the hardest section. 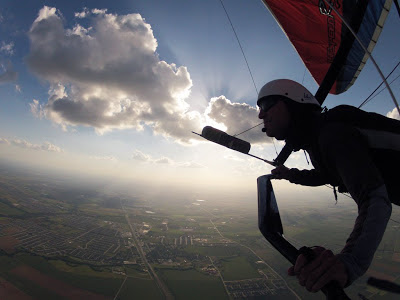 Nate diligently flew the task I had set to avoid the airspace. Alas it went into a blue hole over Bastrop, and Nate went down just passed there. 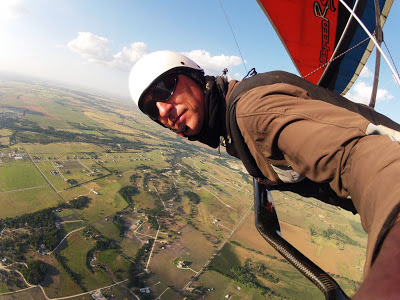 I totally cheated the turnpoints by a few miles - sort of justifying it because I was behind, and had all the airspace programmed into my GPS. This kept me under the cloud street, which got me most of the remainder of the way to Chris's. The flight in was pretty buoyant and smooth, and there were still good climbs to be had at 7:30pm. 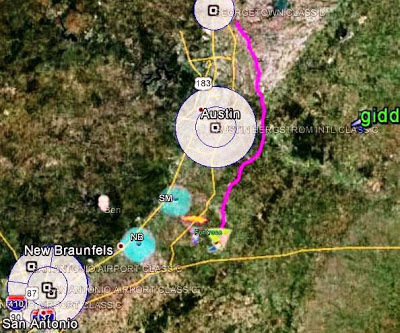 This is what the flight looks like with the airspace in Google earth. I use airspace files from Lloyd Bailey - find them here : www.lloydbailey.net/airspace.html . I haven't yet spent the time to figure airspace on the 6030, but I did put together a gpx file for the club since we all have a Garmin.
Basically I looked up the co-ords of the airspaces on Sky Vector .com Then found out the radii of the various airspace classes. Using Mapsource I put a proximity circle around center and traced the circle as a track. The track can then be uploaded. I'm sure its the caveman way of doing it, please leave a comment if you have some advise :)

Thanks to Nate for figuring out the logistics of a tow and retrieve - and the life saving sandwich, thanks to Jeff for the tow(s). Thanks to Danny for lettings us use his luxurious truck :)
6 comments: Links to this post
Labels: hang gliding, texas 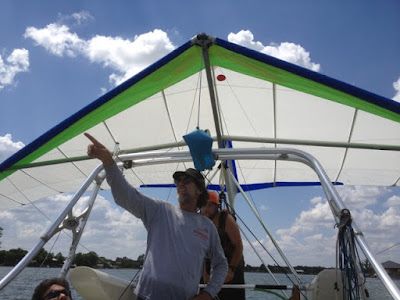 Thursday was a fun day, Jeff invited Andy and me up for some afternoon boat towing at Marble Falls, just West of Austin. 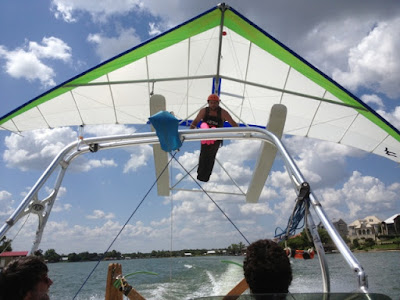 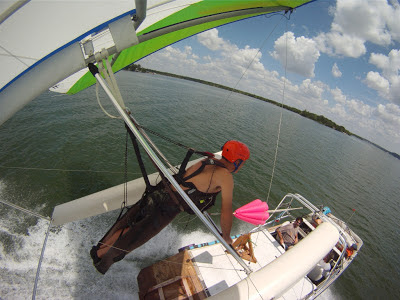 This was my first time towing from a boat, I gotta say I loved it. Warm clear water, flying in swim shorts, pretty nice views. What's not to like. 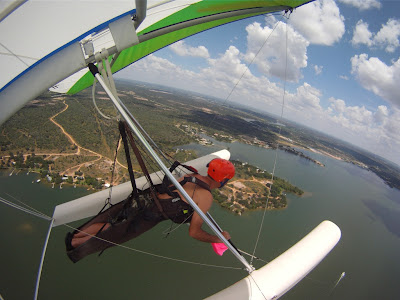 It's neat watching the boat get smaller and smaller as you you ride the smooth air up. 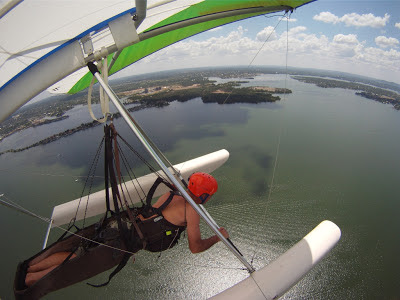 With a little wind we were getting upto about 1200ft on tow. There was a little
lift around, but I think most of it was being stolen by an approaching storm, and of course we are over a lake. 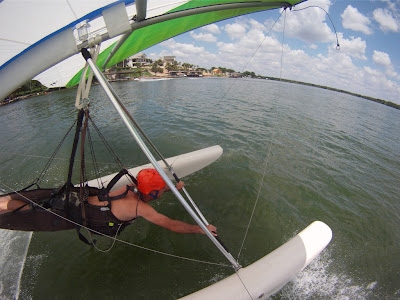 
We had been watching the radar and some over development to our south. After 4 flights it was time to get the equipment away. We were in good time before the gust front hit. Yeeha - good fun - Thanks Jeff.
No comments: Links to this post
Labels: boat towing, hang gliding

Messing about with a windsurfer. 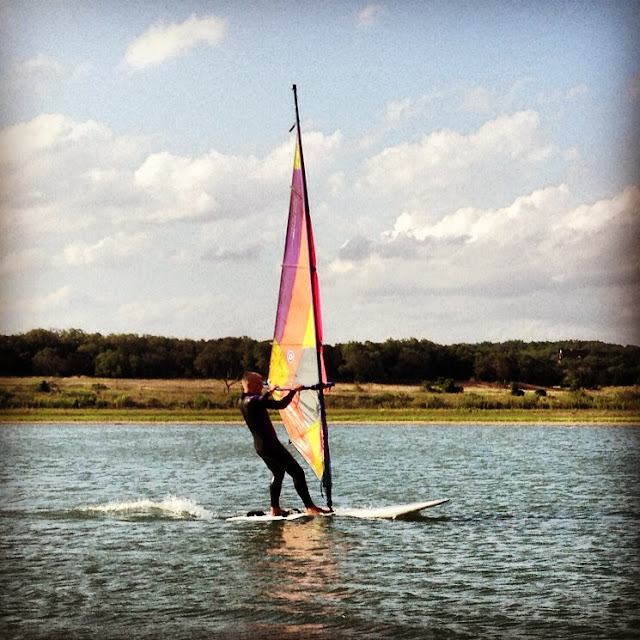 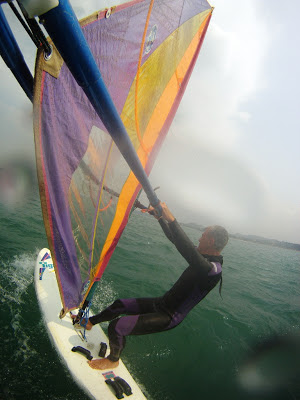 I tried Windsurfing way back when I was 14 or something like. I never got that good, but now living almost on a really inviting lake it'd be a waste not to play with it some more.

There's a put-in spot just 5 mins away and it's generally pretty windy (which is among many reasons I've not been flying much recently).

It's really nice to be able to go for a quick sail after work. And go cool off in this hot, humid environment. The water is pretty clear and a good temperature. 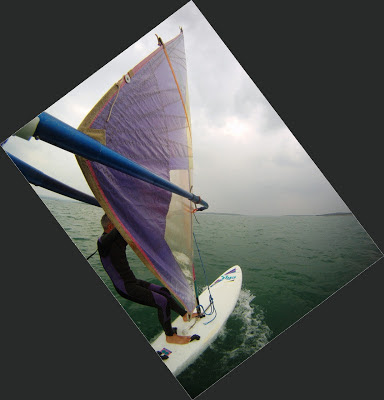 There's a fun crowd here giving me a ton of helpful advice and lending me stuff. I got brave enough to put the camera on the boom last attempt :)

Next I need to tack, jibe and water start. I've been having some spectacular crashes maybe I'll run some video ;)