The final day. We called a task from Sugar up to Tagues Butte and back to town and into Hunters. I flew Ben Rogers' glider again (Thanks Ben). Bruce benefited from this too as he had bust a tip wand landing in the sage at Hart mountain. Between us we had a pair of wands. It was a challenging day. There was one climb at Sugar that everyone got into and went to 13k, then nothing for 20 miles. I met up with Gerry, and Bruce at the quarry before town and got a ratty climb back to 9500'. I found a slightly better core to the north of Blackcap and climbed to 12K and got the three pictures of the flight. Looking south at Lakeview and Goose Lake. 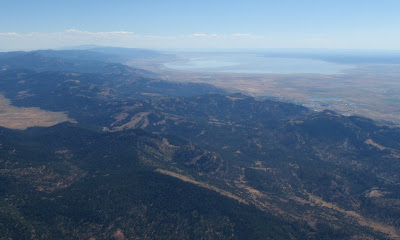 Looking east to Hart lake and mountain where we landed the day before.

Looking north to Tagues butte turn point and Aberts Lake and Rim. I made the turnpoint, but the lift was scary turbulent and difficult to work low. I came very close to landing in a small mountain meadow between the rim and the valley. I almost had the bar ripped out of my hands at 300 feet and got whipped upward for enough altitude to land somewhere sensible. I would have love to have made goal the final day, but I was also happy to be one the ground unbroken. 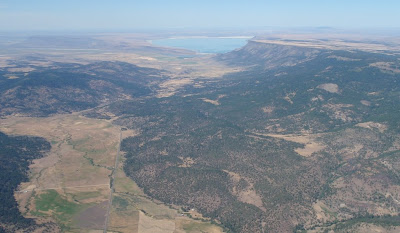