more flying in the San Benitos

A very interesting day in the San Benito mountains. I am really enjoying flying there recently. Apart from being 1hr30 from my house, it is a challenging place to fly. There are few roads and few places to land, and the lift is deep in the mountains. Quite similar to Woodrat I think. My skill level is just now upto it.
I am still trying to get a good poto of a Condor, this guy was really big, alas far away in this shot. 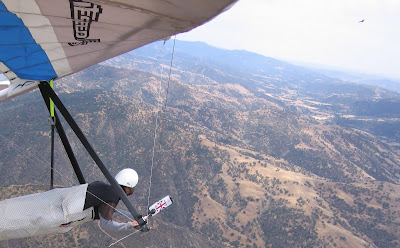 Saturday I went over Red mountain into Hernandez valley. I was really low doing this, drifting halfway there in a sketchy thermal, crossed the peak at 4500ft. The risk was landing in a area that would have required a 3 mile hike, it was 104'F. 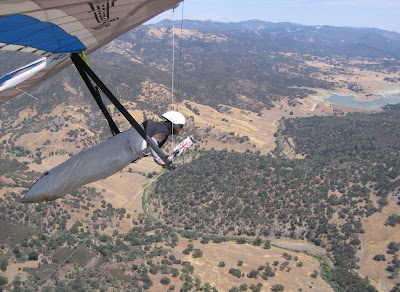 Starting to pick out an approach I was hit by a blast of hot turbulent air, I flailed around like a leaf while the thermal formed. It was drifting me in the right direction so I stuck with it. 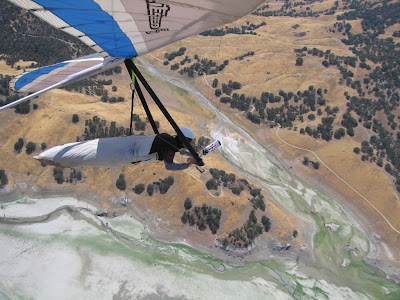 Eventually I got up to 10.6k. where it was nice and cold. 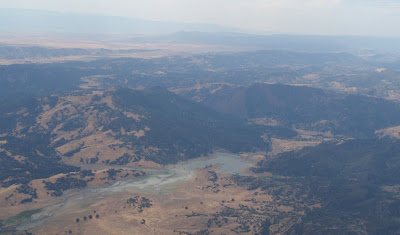 Over goat, looking over at Wildass (San Carlos peak) 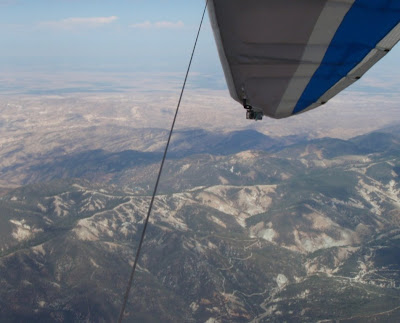 From Goat I headed over into Priest Valley, this is where things get tricky. It was unfamilar terrain, and the retrieve road is two valleys east. I had also gotten 20miles ahead of my driver and out of radio contact. So I started flying much more conservatively. I probably should have headed straight out across this valley. 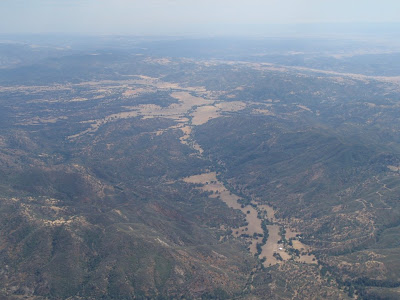 Heading into Priest Valley I turned around and saw this range, I was slighten taken back by it. I had been flying pointy toed and missed the view on the way over. The potential retreivable LZ's are far, far away. 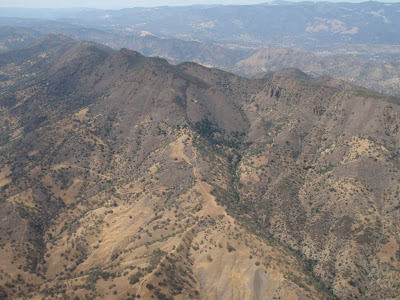 Instead I followed the ridge that lead back to Coalinger, where my driver would emerge. I thought I might be able to climb over Parkfield grade from there. On the way to it, I didn't hit a bump. I was flying over the top of a harder inversion. 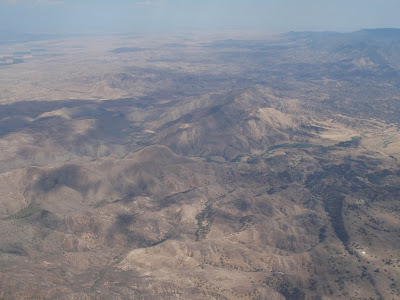 The air remained smooth and calm down to about 2500ft, by which time it was game over unless I could drift in bubbles down the central valley. 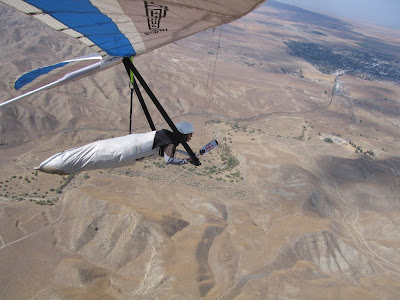 I landed just south of coalinger for 48 miles. A nice day out indeed. Especially as I almost sank out right off launch.
Here are the tracklogs me on the left, Mario (my Driver on the right). 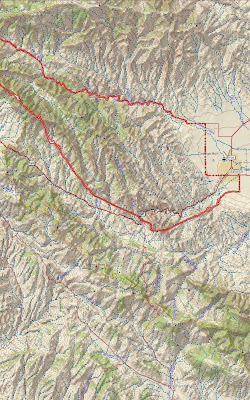 On the way home, we took 198 and got another look at Preist Valley from the far side. 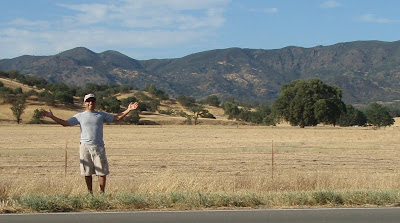 Tinks from Oz, stopped in for a few days on her way back to Sydney from being in Europe. It was her first time in the US, so I showed her around a bit. Straight off the plane we stopped in Half Moon Bay for a bite. And Bonny Doon winery for a quick taste. 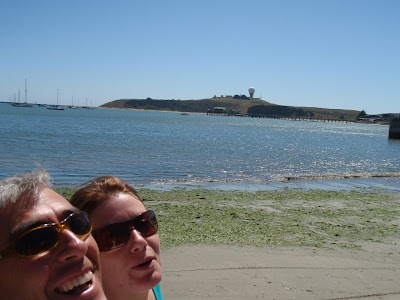 The wind was good for Funston the next day, so back up to the city we went. Only the city lived up to its reputation of being foggy and cold in the summer. We couldn't even see Golden Gate Bridge. 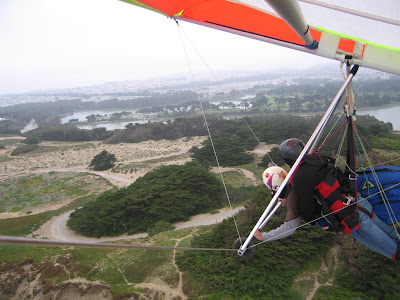 So we settled for a Westlake tour toward Pacifica, it was my first tandem at Funston. I wasn't sure if the glider had enough performance to make the 3mile trip back to launch in the north wind. It was tight. Of course not making it back would only have meant walking the trail back up, but thats not the point :) 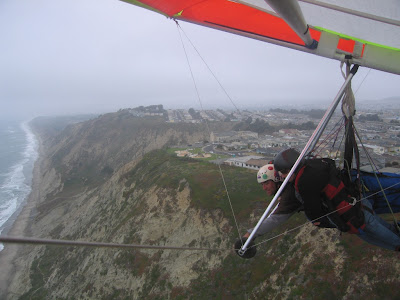 Next up my favorite ride/walk up to Berry Creek falls. From the coast, through marshland, into woodland, following the creek into a redwood canyon. Tinks tore it up ! 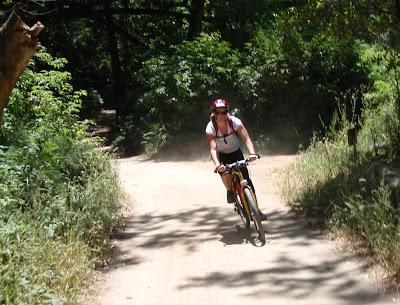 I had promised Sea Otters and here they were, bashing open and munching on oysters. 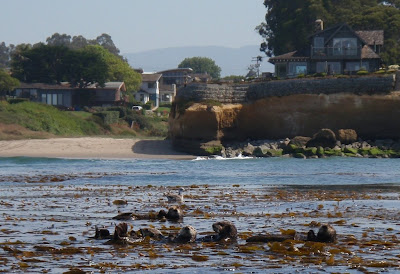 Back into Santa Cruz Harbor. 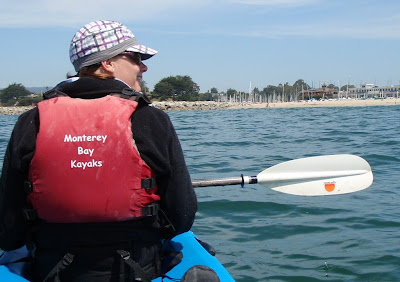 There was one afternoon left for tourist time. Fortunately the sun was out this time. 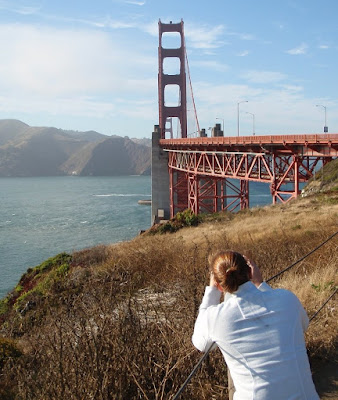 The results are being compiled as we speak. The last few pilots are trickling in and breaking down. The Race leader (Manfred) bombed out early. Jonny who was in 3rd overall finished 2nd for the day. Alex Plonner who was in 2nd overall finished later. It is a very close race.

I am not sure who the offical blogger is but they did a great Job, Click on the picture for the link. Here is Alex unconfirm World champion 2009, but wait who is that in the back right? Hey that's my Mum ! I was able to call her while the pilots were coming across the line. Awesome - thanks Mom. 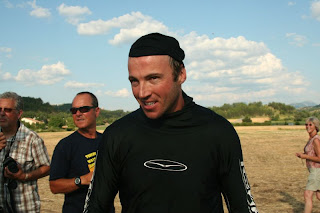 The results will be out later here :
www.chabre2009.com
Look for the link forth on the left.

I wish I could have been there to see the winners cross the line - it is dramatic !
No comments: Links to this post
Newer Posts Older Posts Home
Subscribe to: Posts (Atom)