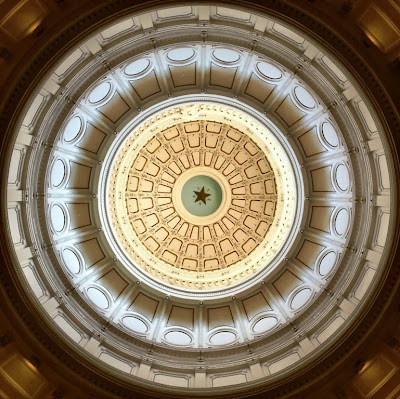 This image looks like a CD or a 2D picture, but it is actually the domed interior ceiling of the Capitol building in Austin. I'd been wanting to check out a "Capitol building" for a few years, and didn't realize one could simply just walk in and around. Since we were passing through Austin, it was a perfect break. 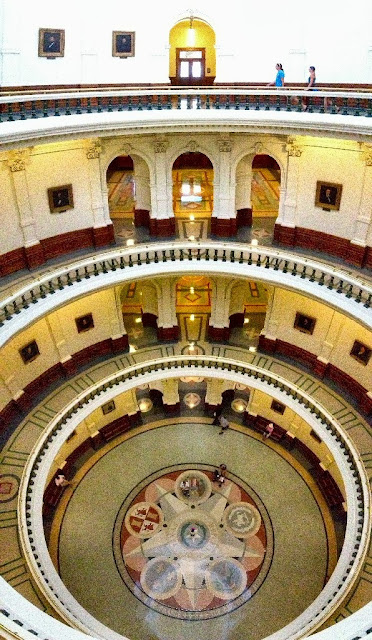 There were a few things inside worth seeing, the architecture is what drew me in. The Rotunda is almost filled with portraits of each Governor of the Texas state, and President of the Texas Republic as it was before it was a state. When the most recent Governor is replaced, a new portrait is put in the #1 spot and every picture moves one spot right or goes up a floor - 6 week process apparently.


The State Senate room, and House of Representatives room were just impressive to me, because of the significance and implications of decisions made in those rooms. Which is reason enough to generate somewhat of an atmosphere. 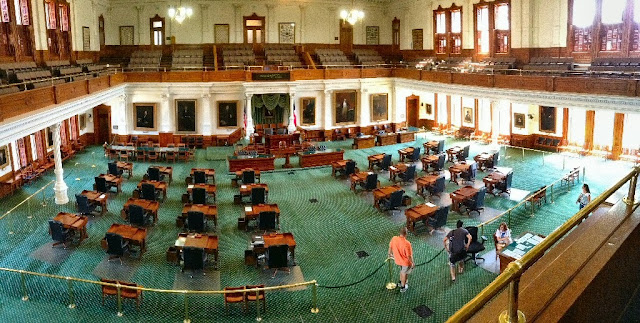 A few days earlier we found ourselves in downtown San Antonio early and decided to visit the "Tower of Americas". It was quiet and not expensive to go up and a good day for a view at 750ft Above Ground Level. 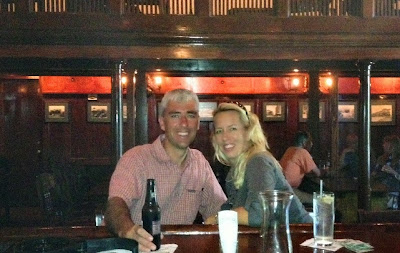 I think this is the only visit we've made to downtown San Antonio in the passed year, so it was a hello and farewell tour, with a quick stop in the historical Menger Hotel Tavern.

Engagement - Up in the air.

Link to Vimeo - Up in the air proposal.
Here is my first crack at a video.

The next iteration is going to have to wait for some better computer hardware. - Any of my video editing friends recommend a particular upgrade such as : an SSD / more RAM / graphics card ?
Does any particular one upgrade alleviate video processing bottle necks more than another ?

In the meantime enjoy :)

Yesterday, with the help of Fly Texas and Danny, I took the big plunge. 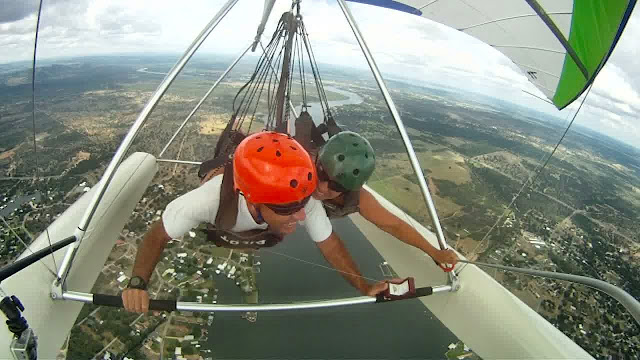 We took off behind the boat, fairly well planned and rehearsed into a sky full of puffy clouds. I'm not great with secrets, but somehow I did manage to surprise Heidi when I popped the question. I had grandiose plans of putting on a bow tie and getting down on one knee. 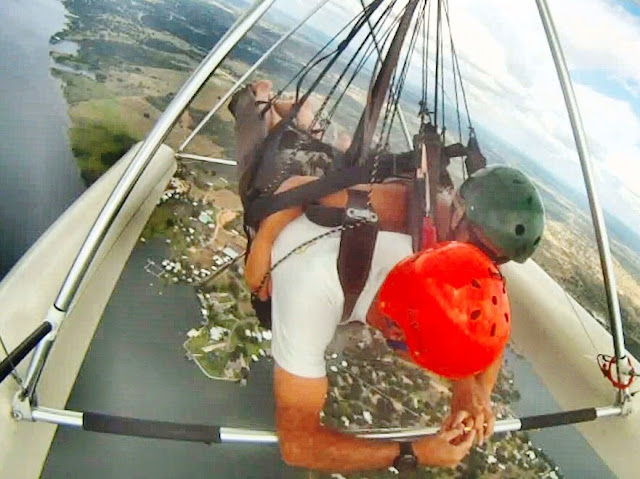 Right off tow, I went to sneakely put on the bow tie, and snapped the elastic that I'd rigged for my head without a helmet, so slightly flustered I put it in my mouth. Not so good for speech delivery :) I rambled through my speech through my ear to ear grin, sort of flying the glider (I think I remember flying?). Surprised and laughing ecstatically she said yes. 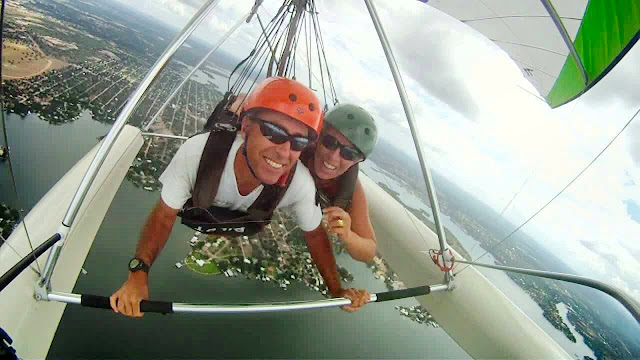 Made for a memorable day, thanks to Dan and Jeff for helping me set up the day, and with the preparations the previous few weeks :) I am going to put a short movie clip together in the next few days.
6 comments: Links to this post
Labels: engagement, hang gliding
Location: Lake Lyndon B Johnson, Texas, USA 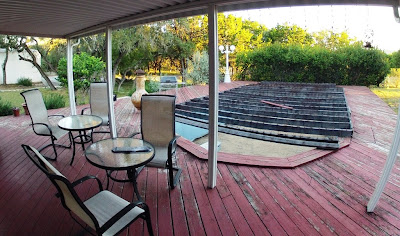 Here's a project started around Christmas time. Definitely took a good deal longer than I expected, but I like the result, it ended up pretty much how I envisioned. It started off as a dilapidated pool that had been covered over with a wood frame and tarp, which had since decayed. 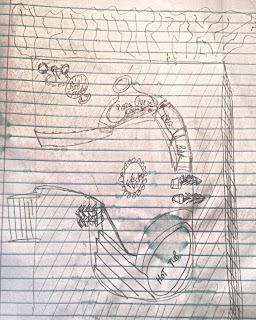 Of course I always like to start out with a sketch of what I think I'm aiming for. The hot tub and pizza over were a little out of the budget but could be added later. The fire ring  idea turned out to be too smokey since the pool siding doesn't vent. 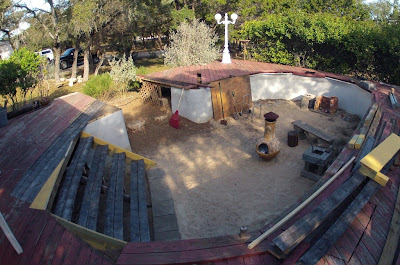 But most other things panned out well. The steps were the largest amount or construction. They make a nice place to sit and watch storms roll through. Cutting a passage through the side was easy, we just bent the metal pool siding around the corner and riveted some more pieces on. 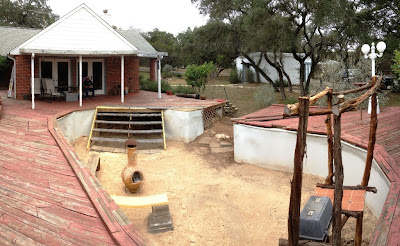 The BBQ stand was a couple of days project, but matched the rustic style. 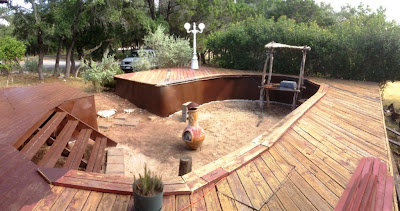 Heidi worked like crazy with a wire brush on wood grinding the sun damaged wood of the surface. While I replaced rotten and overly damaged boards. This was by far the most effort and took a couple of solid weeks labor. 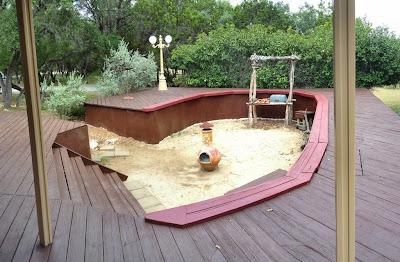 Then I put on some siding to hide the ugly parts and we painted it with deckover, it took 10 gallons and was the most expense part of the project. The wood was all reused from other parts (even and old redneck bed frame). Heidi repainted the light pole and down pipes sand. I think it all looks fantastic.
1 comment: Links to this post
Labels: pool remodel
Newer Posts Older Posts Home
Subscribe to: Posts (Atom)