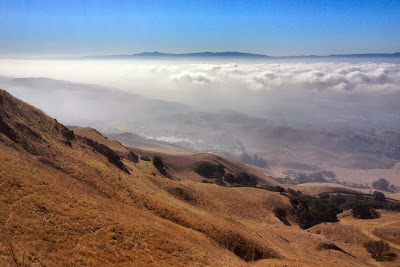 It feels great to be back in California. Seeing good friends I've not seen for a long time. The views from mountains. The nice dry air that doesn't carry so many allergens. Coming from Texas I feel like I'm in the Andies here.

There's is much to be done in the near term, but snagging some time here and there to get out, is important, to me. 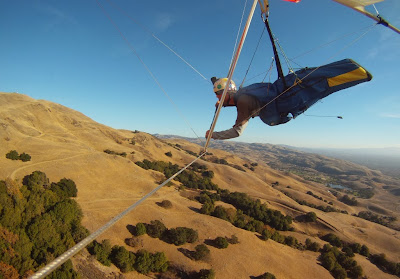 Especially when it comes to getting some fresh air ;) I took a quick hop on the new Alpha. (Thanks to Zac). It features an acute nose angle, and lots of billow. 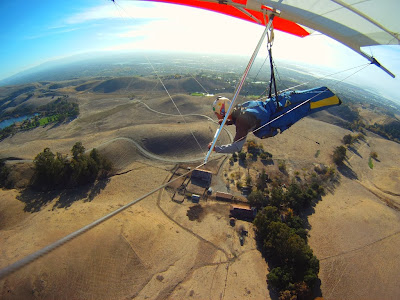 It does definitely feel different to anything I've flown recently. Most noticeable was the turning radius, it can't be zero but sure feels like it, even at low altitude. It takes a little while to accelerate and retains very little energy, which makes me agree that it will be a very good teaching tool; which is exactly the idea. I've seen quite a few falcons zooming up to 15 feet on a flare recently (accidentally).

Also Heidi and I have explored a few local parks. Alviso sits at the south end of the San Francisco bay. We rode the levees quite a distance out into the bay. It affords a nice view of the play ground that is Mission ridge and Ed Levin Park. The levees allow nice flat trails for family ride (when dry). 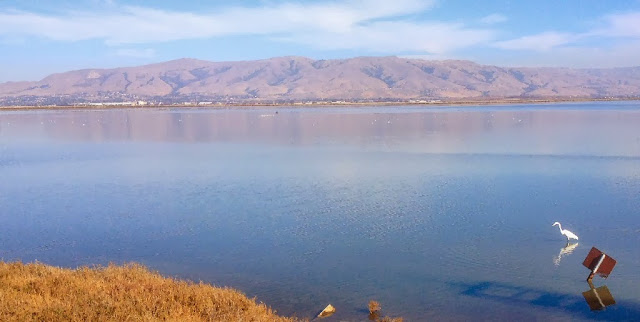 It's an odd feeling being somewhat isolated knowing you are surrounded by 3 international airports in one of the busiest places on the planet. It's very reassuring these places exist. It's how I get my exercise. The bit sized pieces of history are interesting too.

I am in disbelief government considered closing open places down, and then actually did. I'm under no illusion that this is anything other than political leverage. On that note, I enjoyed the next episode in The Hunger games, trilogy, even if it is sobering analogy of what might be the current world culture.
No comments: Links to this post
Labels: California parks
Location: Alviso, San Jose, CA, USA

We set off, with as much as we could fit, which was probably way overloaded. It took 120Ibs of air in the read shocks to mostly level the truck. After a long day doing forgotten tasks and packing the trailer, we were really late leaving. An accident closed Hiway46 and we had to back track halfway home just to get on the interstate. We only made it 1.5 effective hours from the house. 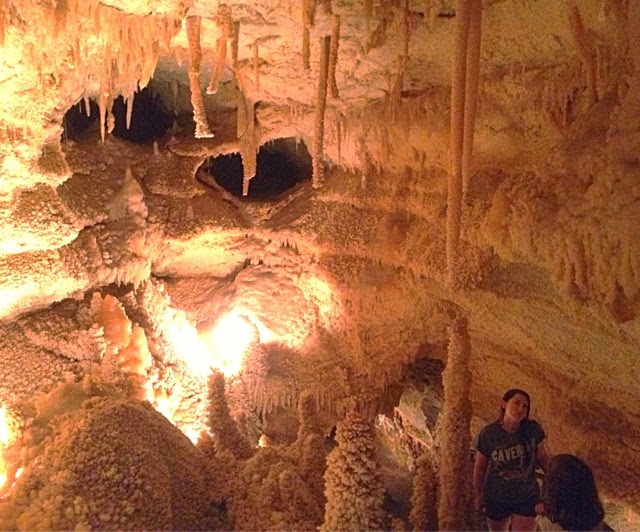 That put us close to Sonora Caverns, so we decided to stop by and check it out. It has been on my list for a few years. It did not disappoint. 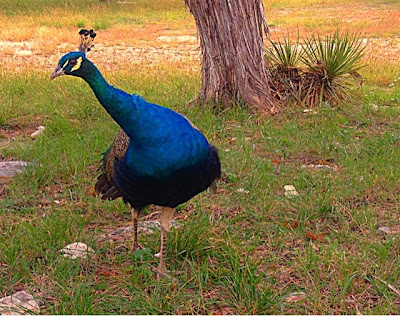 They had some interesting birds poking around the camp site too. Guard Peacocks :) I don't know if I'll pass through again, but if I do, the campsite will be on my list of places to crash if necessary. Along with Balmorhea Springs . 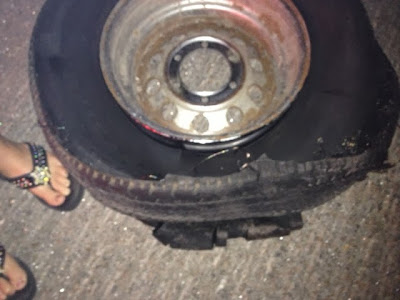 For the first time I was about to get in or out of Texas without some issue, then right before El Paso and the border. Pfffffft flap flap flap... I wonder if they can patch that ? Changing it was pretty easy, even with all the weight, but I was dubious of the tyre we had as a spare, I'd changed it out a couple days before because it didn't look so good. We planned to make it to Robin's place in Las Cruces, now fingers were crossed and I kept below 50mph. I was happy to make it :) I like Las Cruces and was eager to see Robin again. 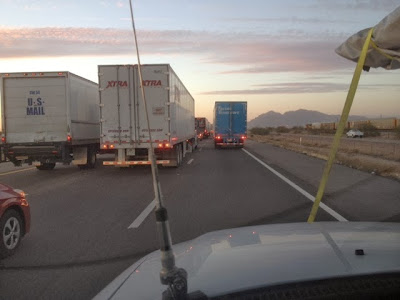 Two new tyres the next morning and was were headed for Casa Grande to visit a family friend. Ahead of schedule for a change we saw the traffic 84 Miles ahead signal. I knew that would be close and also that there's the Pichaco gap there. Murphy's law it was right there, but it's tricky finding these things out from vague road signs, when you are on the move. Closer in it said I10 closed find alternate route. We looked at the map the frontage road goes through, and there was Hiway 79 too, but we'd have to back track 2 hours from the north to get to Casa Grande. Well that would have been quicker... 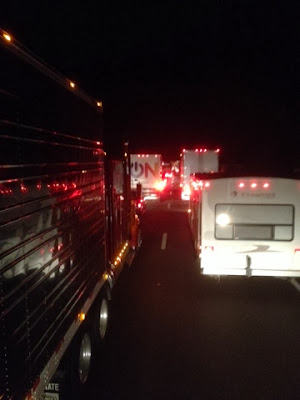 3 miles and 5 hours later, still in traffic. The frontage road was also closed. Would have been good info to post on the sign as well as the mile marker number. Since then I've learned the place to find good traffic info is az511.gov . Traffic was backed up 6 miles when we got there, but later it was 15 - 20miles, which must be just outside Tuscon. 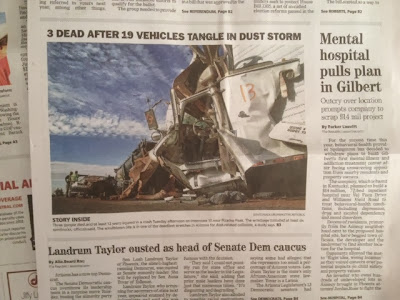 There really wasn't that much dust, poor driving standards and human error are the real cause.


Looks like there was some good flying weather on Wednesday west of Phoenix. 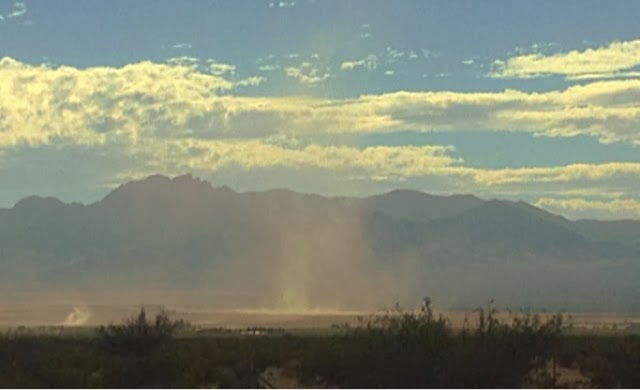 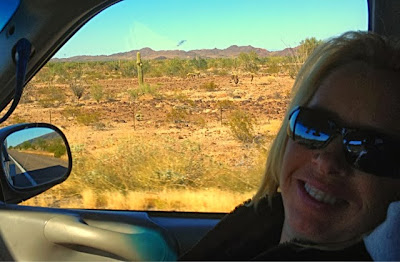 We cruised through the rest Arizona, without drama and hit no traffic in LA at all. It was great to catch up with Kraig and family, even if we were a bit zombiefied. 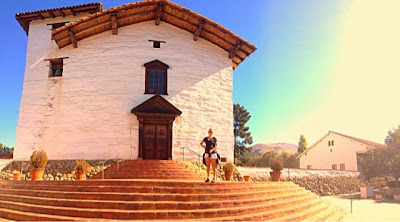 So just LA north to do. No issues climbing the grapevine with our excessive load. The roads were crazy rough just as I remember. I think one of the new tyres is already hurting because of it. We made it to Fremont just in time for Carmela's Haloween party. It was great to see some of my ole' flying buddys again. The next morning we walked around the local neighborhood which has an old mission in it. The next steps, find and job, find a house.
No comments: Links to this post
Newer Posts Older Posts Home
Subscribe to: Posts (Atom)