I have been wanting to do this trip since before I bought my kayak 5 years back. With all the rain the last few weeks, I thought I was going to be taking my sister to the snow in Tahoe. But Wednesday morning everything came together, warm air, calm winds, favorable tides. It was time to go!

By the time we had the permits, kayak and camping gear, food all sorted and travelled up there, we ended up putting in at dusk at slack (low) tide. We had to trudge through much deep sticky mud to get going. I ended up putting Jess in the kayak and sliding her out there, cos her shoes kept coming off. Eventually we got out to the water, and we under way in an almost full moon. 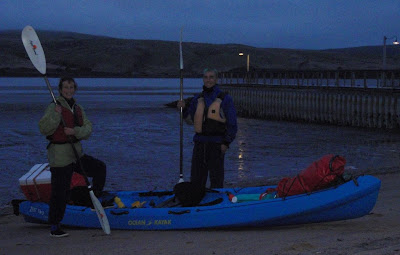 The first camping beach was Marshalls. It's only 6.5km paddle but the tide was now flooding and a bit of a headwind made the first leg 2 & 1/2 hours. It was peaceful out on the water looking at the occasional house lights. That is until we unadvertantly disturbed a large flock migrant ducks. We didn't know what the sound was at first, I had just been talking about how the San Andreas fault was running right along underneath us... It sounded like a freight train.

We got to camp, didn't find any particularly high ground but settled for the high spot, it looked like it should work. 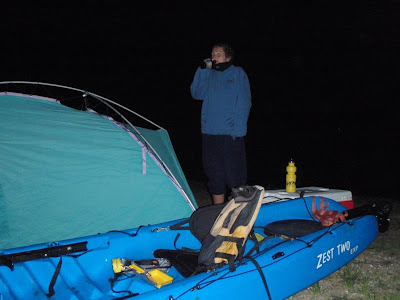 The 2nd day's high tide was a 6.4ft high at 10am. Not high globally, but one of the highest of the year around here. It came with 5 feet of the tent. 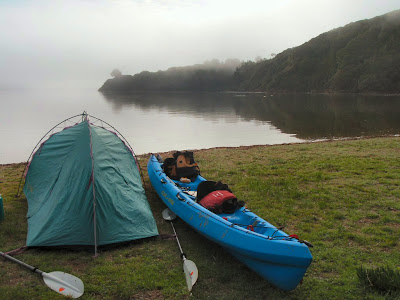 This pond had a bazillion frogs in. It was Incredibly loud, I had no problem waking every 1/2 hour to check the tide wasn't going to wash us away. 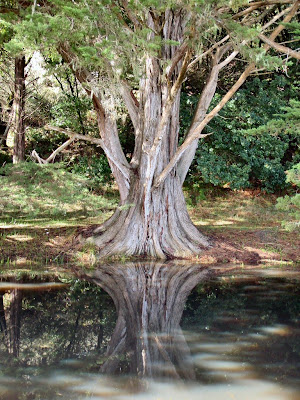 Low tide was to be -1.4ft one of the lowest of the year. So getting out was going to be easy. So we had a lazy start and waited for the sun to come out over a slow breakfast. The water was beautiful. 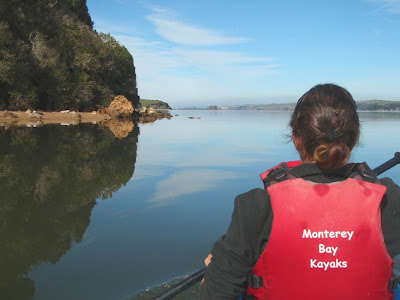 We paddled out into the strong current and were swept to Hog Island in no time. 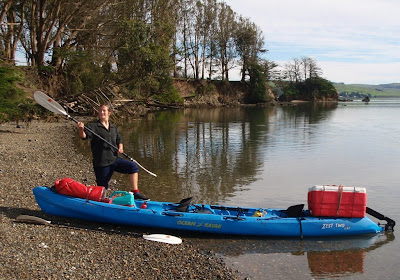 Around Hog Island sand banks started to appear and the seals were checking us out. 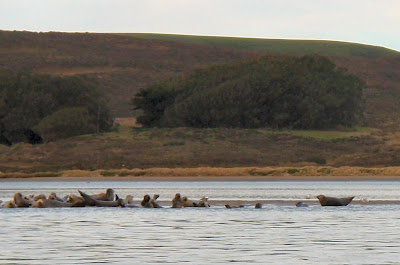 In the distant we could see the Tule Elk in the reserve, it was all too easy. 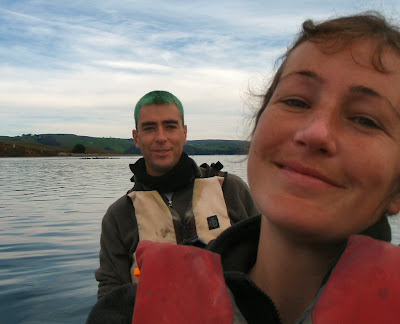 Again in no time we arrived at the last pullout spot on Tomales peninsular. 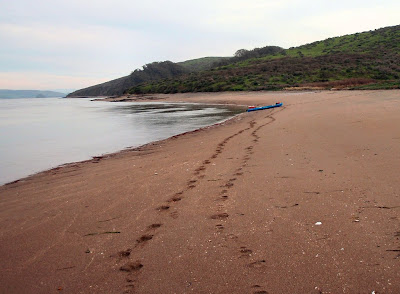 We set up camp and had enough time to hike over to the real coast, through the Elk reserve. It is all part of Point Reyes National Seashore. 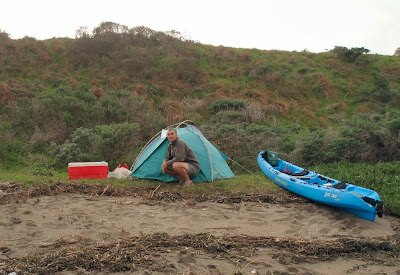 The mussells there are huge, likely because they are protected in the park. 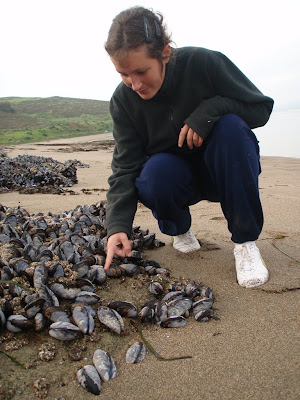 There were bigger Elk farther south, these were just hanging out watching the sunset with us. I walked to Tamales point just to check it out. After dinner we met up with a couple of other kayakers Cheyenne & Stephen. They had gotten a fire permit and wood, very smart. It was fun sitting around a fire fairly isolated from society. 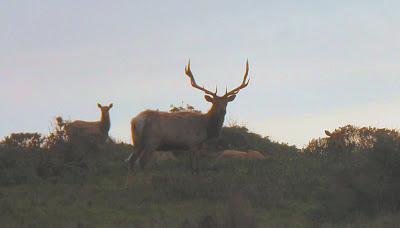 The next morning we had to get on the water early to catch the tide in. The flood was going to be high, but the low tide was only a +2.4ft so not much flow, with a long way to go. It was apparent the weather was changing too, quite a headwind, heavy looking clouds and a fair chop of the water too. There's hog island up ahead. 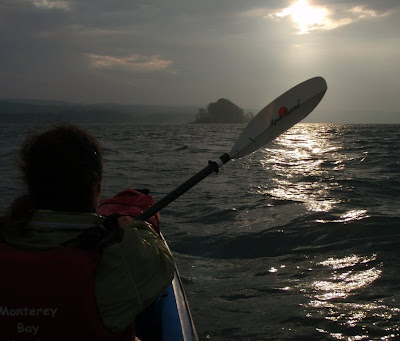 We stopped off at a few beaches on the way, to stretch, empty water and take in the scenery. 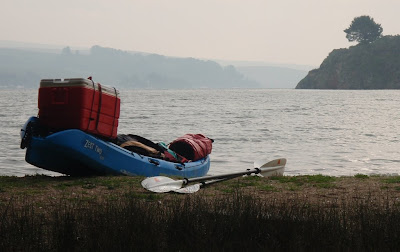 There are a few old derilict fishing camps along the shore. 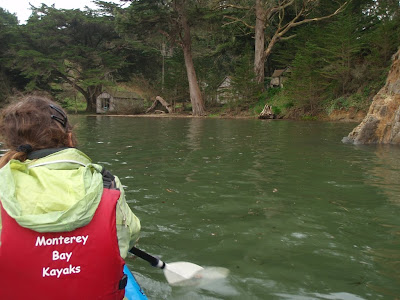 Lots of different rock types along the shore too. 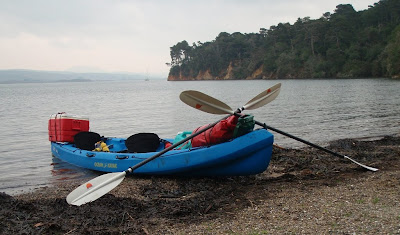 We saw kingfishers, pelicans, ducks and a couple of osprey. 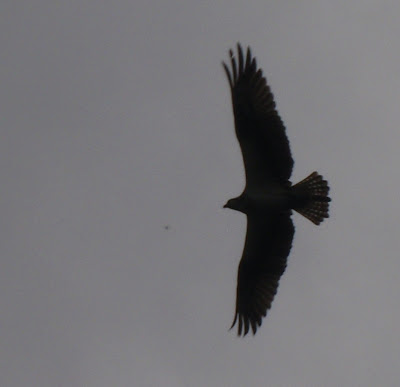 Almost there, we are hugging the coast now to lessen the effect of the outgoing tide. +6.4 feet down to -1.4ft. 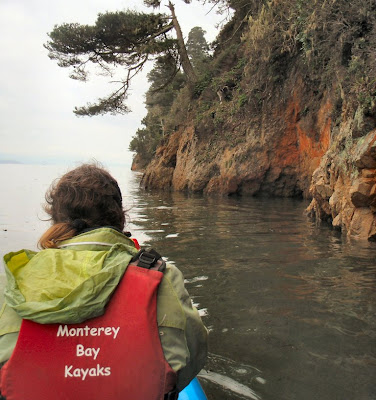 After stopping by Point Reyes, the heavens opened. The wind howled and rain came down in buckets. We were glad to be out of the water! We stopped by Half moon Bay for some chowder and caught this amazing sunset, what a trip! 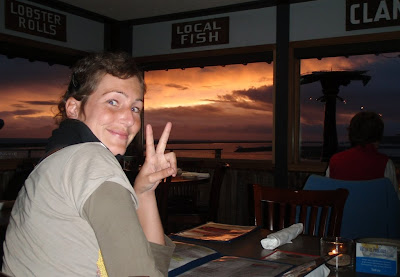 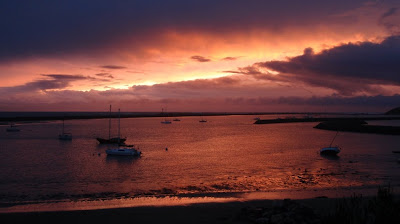 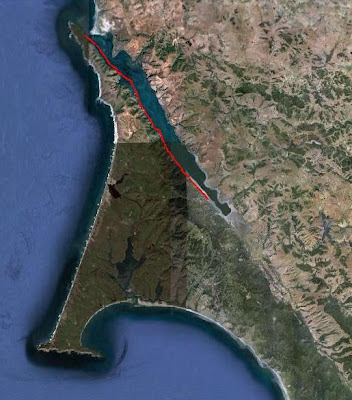