On the final day (Task 8 in 8 days!) strong winds were expected with light broken lift. The winds turned out not to be so strong, but the thermals were weak, especially earlier. I chose to launch later after watching a couple of pilot sink out, and sinking out myself the previous day. Unfortunately it blew down on launch when I wanted to launch, then I almost sank out, as my teamate actually did. I managed to climb back up and out, starting the task 40 mins after the last start gate. I wasn't the last in goal, but I was 48 mins behind the quickest time. 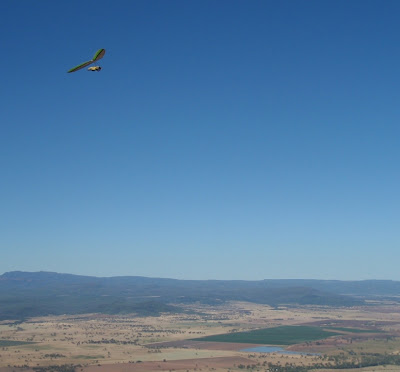 Here are the day winners, Pedro, Blay, me , Jonny, and Francisco. Conrad also won a day. 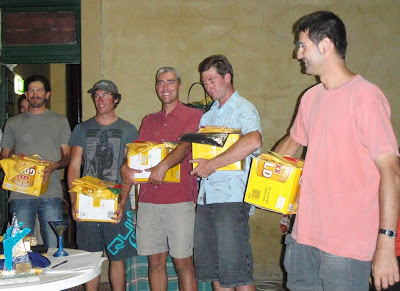 open class winners : Jonny in 1st, Blay 2nd, Pedro 3rd. I came in 5th after Bruce.
The rest of the results are here : soaringspot.com/nswst2009/results/flex/total/day8.html 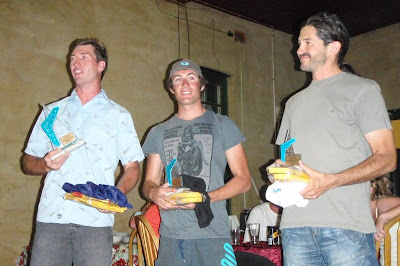 In Oz there is also the best of the rest class, Don, Dustan and Daniel. 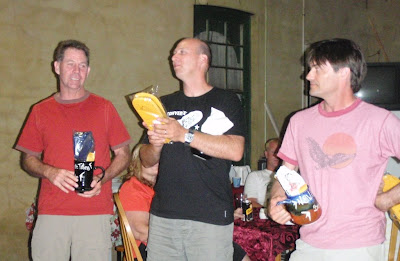 What an excellent competition, we flew 10 times in 9 days including the practice day. 8 out of 8 valid tasks, 27.5hrs and 520miles (963kms). A huge thanks to Monica who organised it, Tinks who helped, Davis for scoring , the task comitee, Dr death (Al Giles) for the weather and Vic and Tom at the pub. 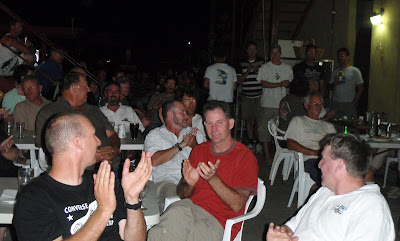 I think I flew better in this comp, and attribute better judgement to taking ibuprofen before launch to combat the hayfever headache I've been getting in the middle of the afternoon. Also to glider tuning. I had some trailing edge flutter and the handling had gotten a bit sprilally, so I decided to try relaxing the leading edge tension (this in turn puts more tension on the trailing edge on a glider with tip wands). As a nice surprize this cleaned up the handling emensly. I had much better feel of thermals and could find the faster rising cores much more effectivly. I did this simply by reversing the insert in the tip wand cantilever.

thanks Ryan :)
A great way to finish the tour.