It was quite bumpy today. The task was an "M" shape with legs into a 20-30km/hr. We launched from a NNE facing site called Towanga gap. Being cloase to the back I was lucky to get on the alternate list, and launched 3rd. Otherwize I would have been back in the trees and on chase again. 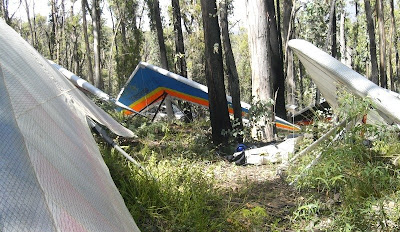 The climbs were good despite the wind and roudy air. I took the first start clock. 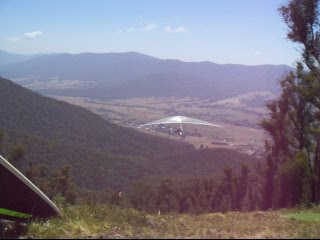 I battled along the course catching pilots that had passed me then being passed again. It was weird spending an hour to go 10kms and almost sinking out at the turnpoint, then 40mins to scratch back up and go the 22kms to goal. Stranger still was there were only two gliders there. It turns out they hadn't flown the task! I was first in goal, Blay was right under and behind me, he took the second start gate. Turns out I came second for the day!! I was pretty stoked since I have been making an effort to fly more efficiently recently, and up until now it hasn't been working so well. I also got to fly with Corrina and Lucas quite a bit which was fun.