With news of Jeff, Jamie, Dustin, ++ having great fun at the Canoa ridge races, and Jonny marching back from food poisoning to 1st at Canungra. I needed a flying adventure! A front was appraoching meaning the wind would switch to south before the rain. There are a few sites in the bay area that work in a south wind. Ed Levin, Mt Tam... and a litttle known site in Pt Reyes above Drakes beach (I've not tried flying there before). The weather would be perfect, Ryan figured out the permit process and off we went. 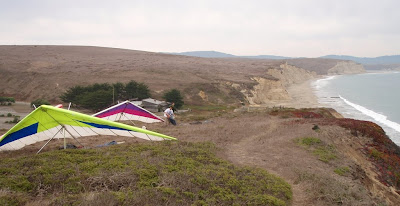 Things looked stella when we arrived, direction was good, wind was light and building. We set up, and I decided to be wind dummy. It was blowing about 9-14 when I checked, but the strength was varying with the cloud cover. I went to launch and felt that unerving rotor feeling like we get at Waddell, except it was really light? I launched and sank out, no matter, I can walk back up the 80 foot path. 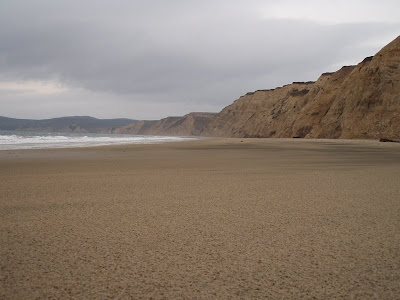 By the time I had wrestled my glider back up, the wind had come up to a perfect 14mph. Ryan was at launch, but just getting torqued all over the place with rotor. Dave had a shot in a different spot and the rotor was worse! Eventually the rain and wind came in, and it was time to drink beer. I wonder when this site was last flown ?