Task 3 yesterday was really fun. Its the first time, I've been able to almost keep up with the lead gaggle - although I didn't realize it was the lead gaggle at the time. It was a short task, so a good start was going to be critical. We were not in a good position for the first start and actually started to sink out, so I started to head back to the tow paddock. At the northern racetrack I ran into 400up and stuck with it to 7200ft. James joined me and we took the second start. It was a long glide to the first thermal and I even had to backtrack a bit, putting me at the bottom of the stack. The climbs improved with altitude, so I stayed a bit after Kraig and the top guys took of just to match their altitude. A gaggle formed up ahead ahead I joined at the bottom and found a better 1300ft/min climb a little upwind. This caught me up to them. From there we just needed one more climb to get to goal. It was quite a race. From the last thermal I waited for 8:1 as the ground is almost all 7 foot tall cactus on the way to goal. I raced off and caught Robin and Phil. A really fun fast glide.

A little later Wayne made it into goal, his first I think. The first goal smile lasts a while - it is a defining moment.

Arizona has retired military jet everywhere - probably because the climate is good to them. Gila bend airfield was no exception. 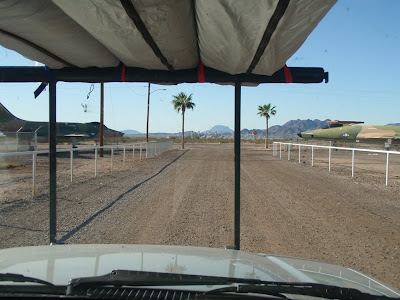