Almost the hardest start ever

Task and Results I made a big mistake pinning off early yesterday, thinking I could climb out myself. I went down and had to re-light. The second attempt the air had softened significantly. Chris, Alex, Wayne, Scott and D.Dave all struggled like crazy getting out of the start circle. I got to 3300ft, actually back to what I pinned off at the second time, and decided to leave to get to a better air. I was down to 500feet just inside the start circle, when I felt the bumps. Taletell signs of a thermal over the quarry I was hoping would produce. I got up through the 3300ft inversion and went on my jolly way.Picacho peak below.

The others caught me at the 2nd turnpoint, having climbed to 10k in a ripper somewhere. From there it was pretty straight forward to goal. Chris did exceptionally well getting out of the start circle. Here is a big solar power plant, rows of mirrors focused on water pipes. Steam to turbines.< 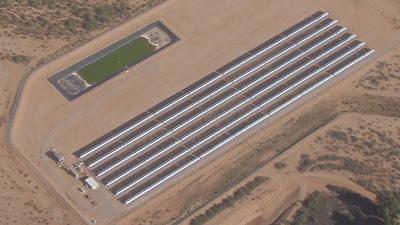 Brian had a great flight too.
Pinal Air Park - where planes can take a nap.

Came in to goal late, but no surprize since I was 1/2 hour after the last start clock. Good flight anyway. 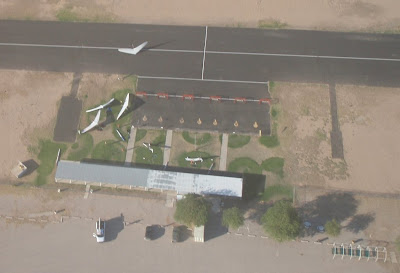