Flying in the midnight sun

Well that was the goal at least. 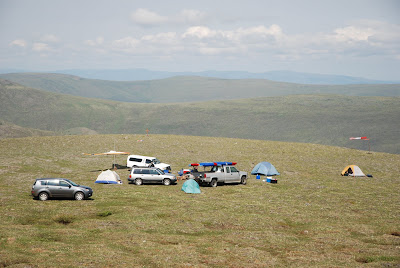 We set up this old but in great condition glider. 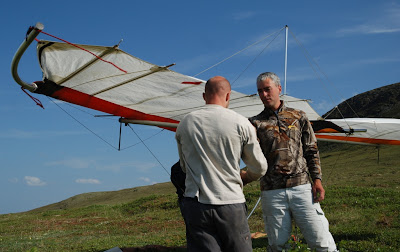 It was single surface, had curved wingtips (same tubing as the leading edge, triple deflexors and straight spruce battens, no luff lines. I am guessing a late 70's glider. 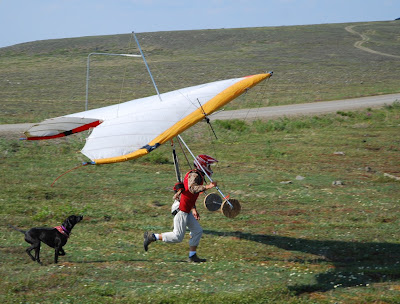 I had a couple of students that day, the weather wasn't great, but we made the best of it. 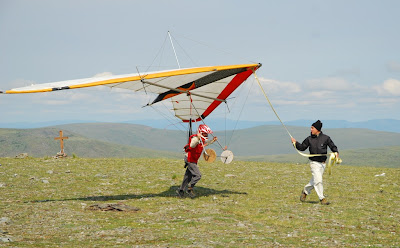 We found a spot near Eagle summit where the winds were laminar-ish and the ground was not too steep. It was a little windy. 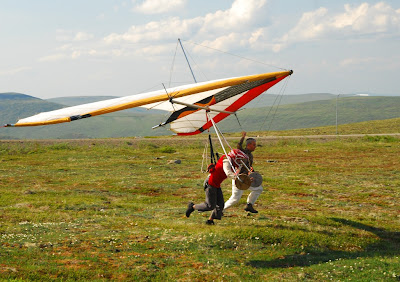 The sun bottomed out at 1:45am we reckon and then started climbing back into the sky. 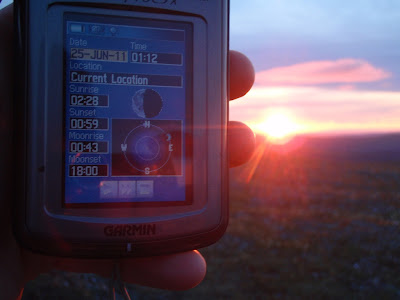 This is about as low in the sky as the sun got. We were about 40 south of the Arctic circle and at about 4000ft MSL. 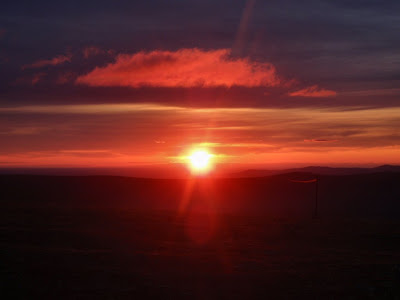 Later we went to soak in the slightly dilapidated hot springs. 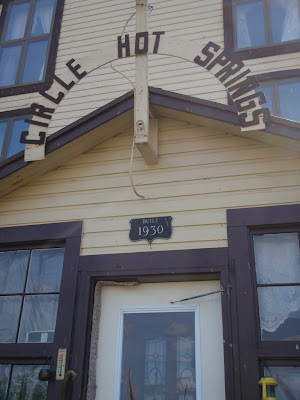 The water was nice though, and the pool huge ! 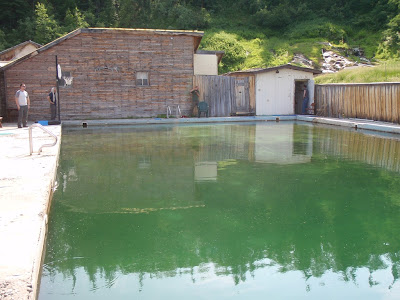 The northern most fly-in. 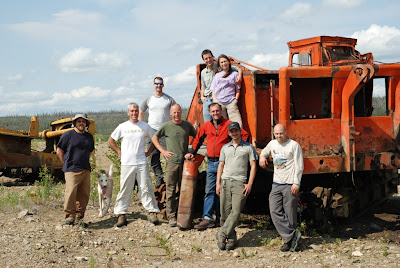 Interesting old glider. Looks like and ASG-21 that has been modified or a copy of one. The ASG-21 was built in 1976-77 by Albatross Sails. I used to work there back then. Loved that glider. First glider I ever flew in the Owens Valley, back in 78.

Hi Chris, what an Honor. Yes this glider while old had a very nice quality finish and some interesting modern features. The sail shape is what impressed me. Speaking to Chief he thought it was a company based out of Hawaii - is that Albatross Sails ? Did yours have luff lines ?

Albatross Sails had a big following in Hawaii. Prior to the ASG-21, they used to sell sails for folks to build frames for. Sort of the sailmaker model from sailing where the boat maker doesn't make the sails. This looks like an ASG-21, but it could be an ASG-18.

It does have a few features the original didn't. The tips are different and no, luff lines were not a feature back then. I did add luff lines toward the end of the time I flew it. I also added a floating tip that looked like the one in the picture.

I have long been curious how it would handle in comparison to modern gliders. In it's day it had some tricky handling, but it only weighed 45#s!

I flew in the first worlds cross country meet which was held in Owens Valley CA. The XC Classic was held in 1978 after George Worthington set a bunch of FAI distance records for foot launch hang glider. George used an ASG 21 like the one I flew in the Classic.
At the time we did not use oxygen and were climbing to 18k ft msl. The ASG was one of the first hang gliders that were staticly tested for load. The ASG 21 proto type had won the 1977 US Hang Gliding National.
A friend and I still have the glider in storage.
I currently fly a modern topless hang glider for cross country flights. My Moyes S4 weighs 30 pounds more than the ASG 21 and has a 80% better glide and speed.
Butch Peachy Del Mar CA

This is funny. Found this by accident.
I was one of those students..finished up my training self teaching.
I am a H4 now.
I gave the glider to it supposed builder.
here is this seasons flying:
https://vimeo.com/106029674