Those living in California will now have heard of the proposal to close almost all of the california state parks. This is quite terrible. In times when many are losing their jobs a place to go and be in nature is close to essential. The are many things that are not essential that we still have. People that pack bags in super markets, while customers just stand and stare... for example but I degress.

This propsal is real, since I can't really beleive that either, I went to a gathering on Monday where I hoped to learn more facts. I go in many state parks frequently. In terms of Hang gliding locally we are relatively unoffected, only Marina state beach would "close". However I beleive that the public deserves access to the lands paid for by their taxes. Closing them seems like a bluff or politic stunt to get the public to pay more attention to and perhaps accept what might be forced onto them.

In terms of saving money, closing these state parks has been shown to cause more finacial loss than it saves. Not only that, it is a pitance compared to the debt. A debt which in my eyes was caused by tycoons, enabled by deregulation in the previous administration, walking off with the equity in various sectors of the economy. Housing, and also many companys whose CEO's just cashed out and walked away. The Ethics of which astound me. Seems to me Capitol gains tax, and obscence profit tax would easily cover the parks, and probably socialized hospitals and education too.

But back to the parks though. I feel strongly that they should be kept open, not just from a selfish stand point, but for the whole community.

The turn out? The organisers were impressed, not exactly the population of the local neighborhood though...

This guy (Fred Keeley - Santa Cruz County Treasurer ) in particular had some interesting points. I am glad I showed up to hear. 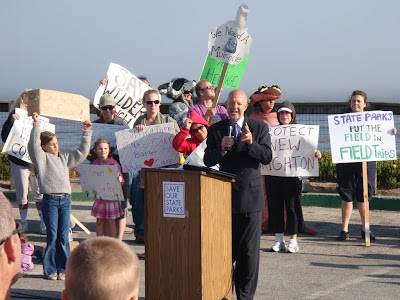 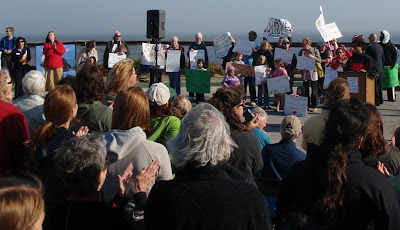 Surely a politician can only cry wolf once?

Great post, thanks for the links. Even our own Marina S.B. is being used as a pawn in the fight. Why don't they just close some highways instead?