After 3 days of wind, we were able to get airborne. It was still blowy on the ground but not so bad up aloft. 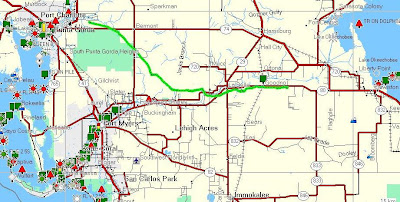 Final glide was pretty fun. I started with Konrad and Charlie, Derek was out infront a little. I was gliding along checking my numbers, I had 14:1 but that seemed really tight Just as I was thinking I should slow down in lift (I was in 200ft/min flying straight) Konrad and Charlie came cruising by. I was too tempted, and I bailed after them. 4km out we were all getting low and the numbers were getting worse. I hit 500up and went round twice, then dove for goal. Just as I started diving for goal Konrad and Charlie started turning to rescue their goal. Cruising across the top of them, I came in just behind Derek who had taken a later start.
Results are here.