Here is Darren the Meet Director on Day 3. 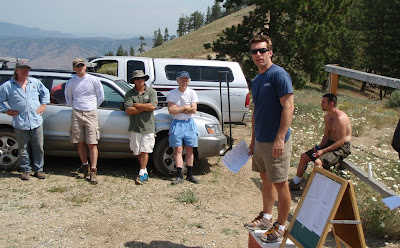 The cummulative results after Day 2. I dropped to second.

Brian and I flew together in a valiant attemp to go big and claw back some points. We launched an hour ahead almost all the other pilots and got out on the the flats early. Progress was quick to Withrow, and the sky was really working to farmers. Then we headed east into a blue hole (the same route as the first day) Coolee city.
The air got very quiet and clam and we went on glide for 15 minutes. Things had slowed considereably, we eventually climbed back to cloudbase and tagged the waypoint. By which time many pilots had easily reached Farmers - the previous waypoint. From there we headed north back into the active sky, and made the sims waypoint pretty easily. We caught Bruce there and got a good climb (1200 feet per minute to 11k) on the way to Leahy. About then the cloud over the rim just exploded. There was virga, hail, rain and gust fronts and we had to abort our mission and land safely. Rats. A really good flight, but the points won't reflect that, on account of being short on the last leg and not making goal. We were happy to be on the ground safe without any breakages.
Here is Brian putting on his drinking shoes (planning on going big). 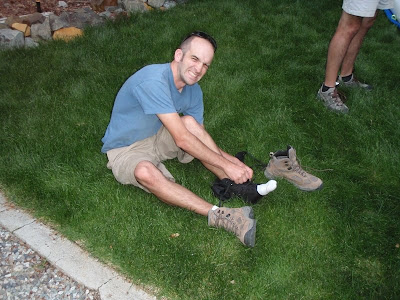 You can think of your own comments for this one.