On Friday, we started with a nice Brunch prepared by Fabrice, and off we went to Mission peak for a tandem flight. Traffic was really bad, we made it to launch by about 3pm. We set up quickly and flew for about 20 minutes. Unfortunately I think I must have got some salt water in the camera as the auto focus was jammed... She was proud of her first flight. 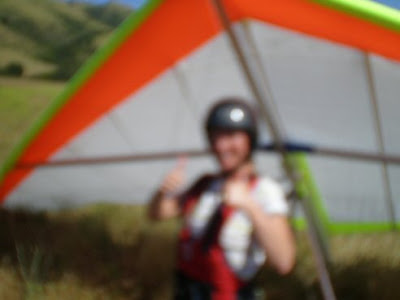 Now Tamsin and Fabrice had to make the flight, which should have been fairly straight forward except, the traffic was aweful (a freeway was shut and police were searching cars) There is a long trun around at SFO between rental car dropoff and BA closed the desks 5 mins early. They could have still made it had they know to self print boarding passes and use the luggage drop, I didn't know that until I called BA,
but then I didn't have a way to call Tamsin or Fabrice back !! Drat they missed their flight (that had been oversold anyway).

Still, It gave us all another night together and we went over to Halfmoon bay for the rest of the night. We had a little time in the morning to see the coast up from Half moon bay to Pacifica, and have breakfast at Leighann's diner.