I have been super busy since getting back from Arizona. But the event hasn't left my mind. The meet dished up challenging (to me) flying, and yet I found it to be one of my favourite meets of this season year. I had a few bumps in the road getting there to say the least. However I gained much positive from the flying. We flew every day of the 7 day meet (a first for me this year). While I scored poorly, I feel like I made many good decisions, as well as some not so good (new mistakes) and new lessons. One thing that has come to mind was the direct decision to result feedback. In a competition environment the decision feedback is so much better than just bumbling along cross country by myself, still, there have been many times when I've zagged instead of zigged and wondered which was the faster choice, and not known to this day. This meet was different... Likely being on radio with some top guys like Jonny, Carl and Kraig, helped very much, and maybe the conditions forcing gaggle flying contributed... When I left the gaggle on two occasions I was down not so long after.
I felt confident enough to go on ahead and search out the next thermal and perhaps catch the gaggle ahead, feeling like it was the right decision at the time, but then the strategy would fail. Of course I would then see all the pilots I was with drift high over my head on course.

Flying closely with Jonny, Kraig and Carl in the tough conditions I got observe some style I had not seen before. The last day was amazing. Both Jonny and Carl went way off course to get a climb, which without we certainly would have been on the ground. 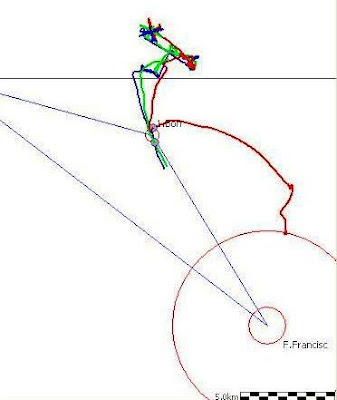 The big circle is the start cylinder. Carl (Red) stayed behind in the thermal that most left after topping out at 7000ft for the third time. Most went on a long glide not hitting a bump 11km. We flew right through the turnpoint and onto higher dryer ground, then we started grovelling Jonny (green) found the 120fpm climb and left it in search of something better knowing he could come back if needed. He flew almost 180 to course line to some birds down wind, and found a snakey thermal core that would get us back in the game. I would never have chosen to do that because I would not have expected it to work, but of course it was the only game in town. Meantime Carl had stayed back at the start and climbed to over 9k, and was now flying over us. Had it been me I may have flown right over had I not hit any bumps. (I did do this at the British Nationals and flew to the ground). However Carl sat like a school boy in detention, slowly circling down to us to find that when we reached the same altitude the thermal fell apart! But having buddies is good and between us we found the next climb. The rest of the flight went well, with the exception of my final glide where I took what I thought was a slight gamble (12:1 glide to goal) but found a very bad line into goal and ended up 5km short! 5km! thats a lot. My log shows I got an 8:1 downwind.
It wasn't how I wanted to end the meet, but had the gamble paid off I would have been first into goal, and it was that which made me go for it. That stratagy will work sooner or later ;) 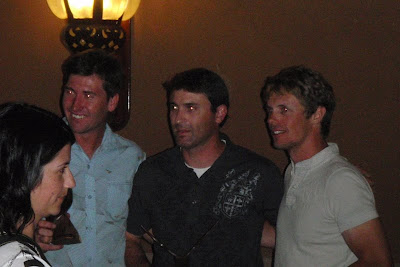 So Kraig won the meet just ahead of Jonny with Carl in 3rd. Well done chaps!
results