Sunday I had the good fortune to fly with a few very rare Californian Condors. We launched in the San Benito Mountains just east of Pinnacles Nation Monument. The Ventana Wilderness Society (link) has a release program to re-introduce the species to the wild. This guy (313) is 4 years old, and not fully grown with its 7 foot wingspan, they can live to be 50 years! The oldest in the program is 11 years (which is how long the program has been running). They are equipped with radio tracking devices, and as the circle over head you can hear the flying surfaces carving through the air. 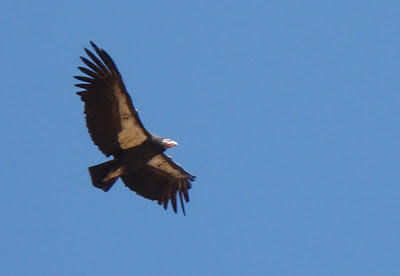 As I thermalled up to around 7k with sun would eclipse every once in a while as the giant passed 5 feet over my wing. You could see the turbulence travelling through the wing like a ripple in a flying carpet. I was utterly beside myself when what had the look of a collision, had the huge beast elgantly soaring along side me 5 feet from my corner bracket. At 4 years old these birds are young teenagers and behave like it, according to my friend who works at the release centre. 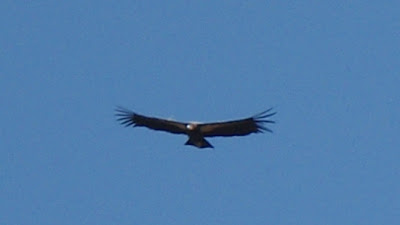 The San Benito range, San Carlos peak is under the larger cumulus, I think the valley in the centre is Cedar Flat? I went about 4 miles into the headwind, but better lift, hoping to get to Goat Mountain and turn back. Eventually I decided to be kind to my chase crew and head home north and see how far I could get.

The better flying route would have been over to J1, on to Panoche, south to Idria and Coalinga, and see how that goes. That would be a heck of a reteive.

Flying north out of the end of Hernendez valley. 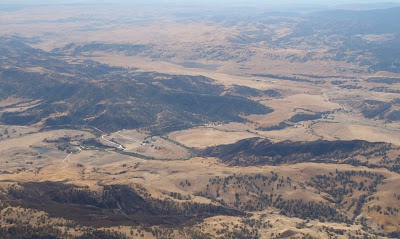 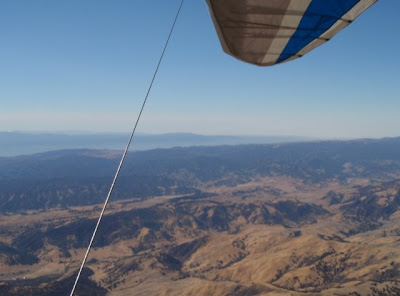 Pinnacles in the foreground. Two of the four inversions are clearly visible. 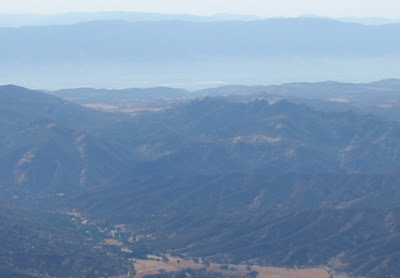 I pressed north, dispite knowing the Marine influence would put me on the deck before too long. I had hopes of making the hang gliding school in Tres Pinos. I landed just short of Paicines. 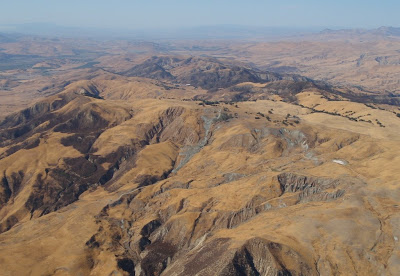